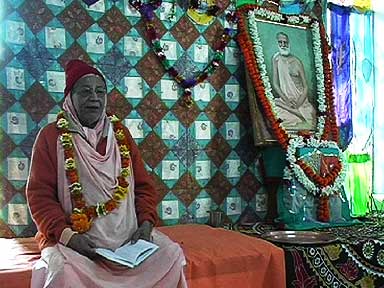 Srila Bhakti Siddhanta Saraswati started the cleansing process, like Gundicha Marjan, the cleansing of the Lord’s Temple. This was his first work in this world.

anera hṛdaya — mana, mora mana — vṛndāvana,
‘mane’ ‘vane’ eka kari’ jāni
tāhāṅ tomāra pada-dvaya, karāha yadi udaya,
tabe tomāra pūrṇa kṛpā māni
(Sri Chaitanya-charitamrta: 2.13.137)
[Speaking in the mood of Srimati Radharani, Sri Chaitanya Mahaprabhu said, “For most people, the mind and heart are one, but because My mind is never separated from Vrndavan, I consider My mind and Vrndavan to be one. My mind is already Vrndavan, and since You like Vrndavan, will You please place Your lotus feet there? I would deem that Your full mercy.”]
The illusory environment is always attacking and disturbing the jiva-souls in so many ways. But Prabhupad Srila Bhakti Siddhanta Saraswati started the cleansing process, like Gundicha Marjan, the cleansing of the Lord’s Temple. This was his first work in this world.
The heart must be made like Vrndavan. It won’t do to keep a jungle in the heart. Many disturbing elements are in the jungle, but there is nothing like that in Vrndavan. Everything in Vrndavan is perfectly pure. So, we must worship the Supreme Lord purely. To mix with maya for our sense pleasure and invite God into our heart is gross hypocrisy. With great force, Srila Bhakti Vinod Thakur and Srila Bhakti Siddhanta Saraswati Thakur did everything in their power to smash such hypocrisy.

Srila Bhakti Siddhanta Saraswati Goswami once again revealed to the world that which is eternal and ever-fresh. Before his appearance, people might have been chanting the Name of God, but how did they chant it? In his time, he was the inaugurator of the genuine chanting of Hari-nam.

Their first work was to preach the Name. In Bengal, so many would chant the Name, but in a hashish-smoking party. Some would chant for hours on end. There was no dearth of such Hari-nam in Bengal, but the qualification of real purity was absent. Because of this, Mahaprabhu’s sampradaya or religious succession became completely adulterated. People uttered the name ‘Vaisnava’ with hatred. The groups known as Neda, Darabesa, Sani, Aul, Baul, Kartabhaja, and so on—they all made such a hodgepodge of Mahaprabhu’s high and confidential teachings of divine perfection that Mahaprabhu was no longer respected by the people. If anyone said, “A Vaisnava is at the door”, the head of the family would say, “Oh, give him a little rice and send him off.” Such was the conception the common people had of Vaisnavas.
But the real Vaisnava-dharma is jaiva-dharma, the nature of the soul, the divine life of the soul. Bhakti Vinod Thakur wrote his book Jaiva-dharma to bring genuine Vaisnava religion out to the world.
jīvera ‘svarūpa’ haya — kṛṣṇera ‘nitya-dāsa’
kṛṣṇera ‘taṭasthā-śakti’ ‘bhedābheda-prakāśa’
(Sri Chaitanya-charitamrta: 2.20.108)
Sri Chaitanya Mahaprabhu has taught, “The real identity of the soul is as an eternal servitor of Krishna. He is Krishna’s marginal potency, simultaneously distinct yet non-distinct from Krishna.”
And it was this type of transcendental knowledge that Srila Bhakti Siddhanta Saraswati Goswami brought here. That was already present but hidden in the scriptures or holy books, and he revealed it. Srila Bhakti Siddhanta Saraswati Goswami’s unique contribution was the daiva-varnasram-dharma, or Godly socio-religious society, according to the proper interpretation of the scriptures: daiva-varnasrama-dharma, Hari-bhakti yara marma, sastra-yukte karila nischaya. The so-called ‘religion’ that goes on in the material world is demonic or asura-varnasram, but the daiva-varnasram-dharma always strives to worship the Lord. There are many devotional duties, but their aim is exclusively the satisfaction of the Lord.

Prabhupad Bhakti Siddhanta Saraswati Thakur showed us that genuine socio-religious organisation of varnasram-dharma must worship the Lord, and above varnasram-dharma is Vaisnavism or jaiva-dharma, the divine life or religion of the soul.

Sravanam kirtanam Visnoh smaranam pada-sevanam, or hearing, chanting, remembering, and so on, are all duties for no other purpose but worshipping the Lord. The execution of these functions is known, in its primary stage, as daiva-varnasram. The bodily calculation of considering a brahman’s son a brahman, or a sudra’s son a sudra, and so on, is false.
chātur-varṇyaṁ mayā sṛṣṭaṁ guṇa-karma-vibhāgaśaḥ
(Srimad Bhagavad-gita: 4.13)
“The four social divisions are created by Me, and divided according to man’s qualities and works.”
Prabhupad Bhakti Siddhanta Saraswati Thakur showed us that genuine socio-religious organisation of varnasram-dharma must worship the Lord, and above varnasram-dharma is Vaisnavism or jaiva-dharma, the divine life or religion of the soul. This is the line by which Srila Bhakti Siddhanta Saraswati Goswami established real Vaisnavism in the world. A Vaisnava is never inferior to a brahman. A Vaisnava is always superior to a brahman. That is his real position. The position of a Vaisnava is never merely ‘next’ to a brahman. The Vaisnava lives in the other world—the transcendental world of service, seva-maya-bhumika, or nirguna-bhumika, the transcendental plane. And varnasram-dharma is in the saguna-bhumika, the plane of mundane qualities. But the attempt to rise above the mayik plane comes within the purview of varnasram-dharma.
varṇāśramāchāra-vatā puruṣeṇa paraḥ pumān
viṣṇur ārādhyate panthā nānyat tat-toṣa-kāraṇam
(Visnu-purana: 3.8.9)
“Almighty Visnu is worshipped by the person whose practices conform to the social and religious duties [varna-dharma, asrama-dharma]. In this world, there is no other way to propitiate Him.”
Such a teaching guides the world toward the worship of Lord Krishna. But the Vaisnavas live in the transcendental world. For example, if you take prasadam, you are not taking mere rice, vegetables, water, and so on. You are taking what was offered to Krishna. You cannot be responsible for any sin. The devotee offers everything for Krishna’s pleasure.
tvayopabhukta-srag-gandha-vāso-’laṅkāra-charchitāḥ
uchchhiṣṭa-bhojino dāsās tava māyāṁ jayema hi
(Srimad Bhagavatam: 11.6.46)
“Adorned with the garlands, scents, and clothing enjoyed by You, and partaking of Your remnants, O Lord—we, Your servitors, can conquer Your maya.”
In this way, the eternally living and ecstatic (sach-chid-ananda-maya) element that is present within is again fully manifest. Similarly, Srila Bhakti Siddhanta Saraswati Goswami once again revealed to the world that which is eternal and ever-fresh. Before his appearance, people might have been chanting the Name of God, but how did they chant it? In his time, he was the inaugurator of the genuine chanting of Hari-nam.

Totalitarian war against maya. What passes in this world in the name of religion—everything is false.

pṛthivīte yata kathā dharma-nāme chale
bhāgavata kahe saga paripūrṇa chhale
Totalitarian war against maya. What passes in this world in the name of religion—everything is false. You are jiva-soul. Krishna is like the great sun, and you are like a sun-ray. The sun-ray must always be ‘attached’ to the great sun. That is his nature. Krishna is like a big exalted magnet, and you are like iron. Therefore, He is called Krishna, meaning Krish: to attract, and na: to give joy. He attracts us, and gives us ecstasy (karsan venu-svanair gopir Gopinathah sriye ’stu nah).
This is Prabhupad Bhakti Siddhanta Saraswati Thakur’s gift. Many acharyas, such as Sankar Acharya, Buddha, Ramanuja, Nimbaditya, and Madhva Acharya, came and distributed the mercy of the Lord, but the supreme position was given by Chaitanya Mahaprabhu. That was suppressed by the illusory environment, and Srila Bhakti Siddhanta Saraswati Goswami came, cleansed, and revealed that divine gem. He clarified to the world the real position of Vaisnava-dharma. Now nobody can accuse Vaisnava-dharma of being a lower-class religion or conception. It can only be admitted to be greater than the greatest.
Excerpt from Chapter Twenty-two of Affectionate Guidance, compiled from Srila Gurudev’s talks.
Note: This particular talk was originally spoken by Srila Gurudev on the appearance day of Srila Saraswati Thakur, 13 February 1990, in both Bengali and English; thus some parts of this article were translated from Bengali.
Hear the original, full lecture here.