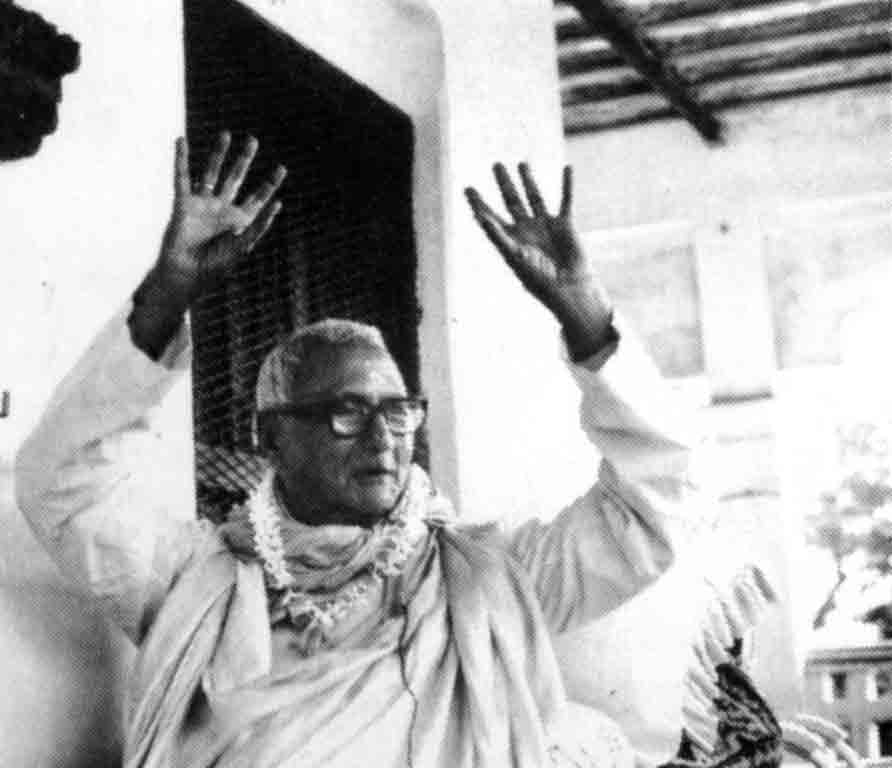 Devotee: Srila Guru Maharaj, in every activity there is a science, so I’m trying to
understand the science of faith.

Srila Sridhar Maharaj: What is the science of faith? The underlying principle of faith is this:

“If I do my duty to the centre, everything is done.” That is faith.

Faith covers the whole by accepting one. Apparently accepting a part, he can cover the whole; that is the peculiarity there. “If I can capture one the whole can be captured; if I love one the whole is loved. If I know one the whole is known.” If anyone has got that sort of conception then that is the seed of faith and he approaches on that path of faith. By approaching the centre, all the branches, all that has sprung from Him, is approached. Pouring water into the root the whole tree is fed. Putting food into the stomach the whole body can be fed. If one gets the key he gets the almirah, the iron chest. It is something like that. Such sort of faith, confidence, trust, is sraddha. That is faith. And he approaches in that way, otherwise, being a part, how can I claim the whole? Our inner necessity is to have the whole, but how is it possible? It is possible only through the heart.

Once in Bombay our Guru Maharaj gave an example of this: that a poor girl has got nothing but if she is married to a prince who has plenty, then through that tie of affection she may think that all the properties of the prince belong to her. It is something like that. Krishna has everything under His control, and we have nothing. But if we can establish a connection with Krishna through affection, if we can establish an affectionate connection with Him, then we can have everything thereby through Him.

This is the idea: to get the whole. By getting one to get the whole. By capturing the fort we capture the country. Capturing the controller we capture the whole that He controls. Bhakti is such an astounding thing that through sraddha, through bhakti, the small can control the big, an atom can control the centre. It is the speciality of devotion, sharanagati, surrender. Surrender is the most wonderful thing in the world, which makes it possible for the small to control the great, the smallest to control the greatest. It is only possible by this means: through love, through surrender. The smallest part, the particle, can control the whole only through faith, through surrender. He is so kind, he has such kindness in His heart. By humility, by our incapacity: “I am the most wretched, most fallen, so attraction should come to me. I’m the most negative, I represent the most negative aspect, so the positive should have His greatest attention for this negative.”

So, so much praise is shown for bhakti in the scripture. Bhakti can do what is impossible: it can control the high to the lower. This is affection, this is devotion proper. Devotion proper has such a characteristic, that the high is controlled by it. Suppose a general after conquering a country has come home and his young child takes him by his finger and draws him and he is following. A great powerful general can be controlled by a child. Why? Through affection. Affection, or love, or faith, is a wonderful thing which can control the big for the low.

Such a wonderful thing cannot ever be, not only discovered but even thought of; none can think also of such things. This is the real nature of faith, or devotion, or affection. Where it is present the big is controlled by the small. Bhakti is to be traced there. Where it is not seen there is no bhakti. Bhakti means this, that the big is controlled by the small. The inner thread is that of devotion, affection, surrender, and love. That is the real characteristic of bhakti. What a wonderful thing it is, and how powerful a thing it is. Strange, strange, strange.

“This is My nature. My very nature is such, Durvasa, that I am committed to My devotees. I have no independence. ‘Iva’: and this is My voluntary contribution, or acceptance, or commitment. Though I am the Absolute My voluntary commitment is such by nature. What to do?”

That is bhakti. So we are out to find the most secret wealth or secret power the world has ever conceived, by which the smallest can control the highest, the greatest. That sort of learning, or tact, or whatever you may say, is possible. Mahaprabhu came with that most valuable thing. “What are you doing? You make yourself busy for nothing, or busy for rubbishes? Try to acquire this, this most valuable thread. Try to get this magical wand. Nothing so valuable has ever been discovered in the world. Take to this subtlemost power by which the smallest can control the highest, the greatest. This is love, this is love, this is faith, this is affection. So cultivate, give up everything and cultivate about this, search for this, search for Krishna, search for love, search for devotion. Die to live. This is self determination to the highest degree. Self determination, self realisation to the highest degree is to acquire such position. By humility we may be master.

[“One who is humbler than a blade of grass, more forbearing than a tree, who gives due honour to others without desiring it for himself is qualified to always chant the Holy Name of Krishna.”—Sri Siksastakam, 3]

We will be able to conquer the whole by that sort of qualification, and not by jumping and capturing and carrying and looting and fighting.