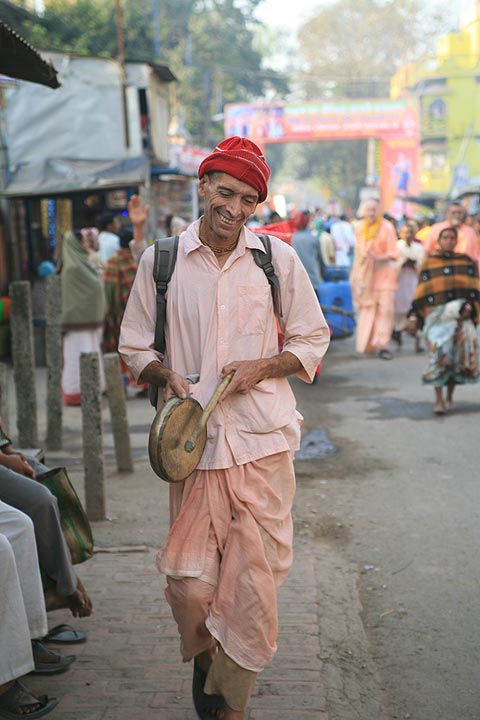 Today we are remembering, with mixed feelings of joy and sadness, our dear brother Nitai Charan Prabhu, who left our company last Thursday, 29 April, in Sri Ekachakra Dham, just a few days after the disappearance anniversary of our Gurudev, Srila B.S. Govinda Deva Goswami Maharaj. Nitai left his body in the same way in which he had lived his whole life: shortly after the evening arati, while stretched out in obeisance to his beloved Lordships Sri Sri Guru Gaura Nityananda, he breathed his last.

In my mind, Nitai lives as a perennial brahmachari, someone who was always dancing somewhere in the vicinity of our Gurudev, engaged in one service or another. I believe I first met him when I was a child, when he was serving in our Guadalajara ashram in Mexico, but it was much later, when he came to live in India full time, that I began to learn more of him and develop a relationship with him. As someone in the role of a manager, constantly faced with the challenge of harmonising opposing elements, Nitai was a dream. He was happy and eager to do anything and everything: he loved kirtan, he loved cow-seva, he loved Hari-katha, he loved puja, and was also enthusiastic to clean and fulfil any other necessities of the temple. Most importantly, he loved the devotees and was truly a friend to all that he met.

Nitai had a childlike aspect and it was easy for persons to either take advantage of or overlook him. Those who knew him better, however, learned that he held a deep wisdom within him. His tolerance and humility was not based on any kind of idiocy but rather a resolute conviction to satisfy the will of Guru and Gauranga at the expense of all else, including his own ego and physical comfort. I remember too the moment that I realised he was truly a surrendered soul: one day after the morning class in Nabadwip there was some discussion about whether to formally study Bengali or not; Nitai shared offhandedly that he had naturally learnt English through reading the English edition of Sri Chaitanya-charitamrta while living at the Guadalajara temple (as there was not a Spanish edition available at the time).

Nitai had a pure and simple heart and he remained aloof from the dark side of community life—politics, gossip, competition, and so on. He tended to be absorbed in his inner thoughts and took great pleasure in recounting pastimes and the teachings of our Gurus. His enthusiasm for attending arati and participating in kirtan was incomparable. As many will remember, those brave souls who tried to attend the four early morning aratis in Nabadwip (which began around 3.30am) were often faced with the obstacle of the gates remaining locked between the two compounds of the Math. Nitai’s solution? He would sleep in a hallway, under stairs, or in any corner of the Govinda Kunda compound so he could attend the earlier Sadashiva and Sri Giriraj aratis.

Nitai’s fault, if we can call it a fault, is that he had no care for himself. Even if he had new cloth he tended to wear faded, torn clothing. At times we had to watch over him to ensure he was eating well and getting the nourishment he needed. Nitai would never ask anything for himself; yet because of his pure and affectionate nature he always had a solid group friends around him who would care for him and watch over him as needed.

Originally from a very well-to-do and loving family in Guadalajara, Mexico, as a young man Nitai had a bright career in electrical engineering ahead of him. When he first encountered the Krishna consciousness movement in the early eighties, however, he left everything behind. Nitai spent some years serving in ISKCON and eventually, through the grace of Sripad Bhakti Pavan Janardan Maharaj, came to the shelter of Sri Chaitanya Saraswat Math and our beloved guardians Srila Bhakti Sundar Govinda Dev-Goswami Maharaj and Srila Bhakti Rakshak Sridhar Dev-Goswami Maharaj. He served for many years at our temple in Guadalajara under the guidance of Sripad Janardan Maharaj and Sripad Bhakti Kushum Ashram Maharaj, and eventually, after many visits to India, came to live permanently there.

Nitai had an extraordinary attachment to serving in the Dham and in his last years nothing could remove him from India. Some years ago when he became seriously ill I recommended he return to convalesce with his loving family in Guadalajara, who were also eager to receive him, but he could not bear the thought of leaving. Eventually due to visa issues he was forced to return to Mexico; back in Guadalajara he wasted no time and with the assistance of the devotees was able to obtain a better visa for India.

Due to an accident as an engineer in his early twenties, Nitai lost some of the mental capacity he originally had; yet I feel he was wiser than most of us. Nitai is someone who, in connection to the world, had everything but wanted nothing. Always dancing and always smiling, his only desire was to remember and serve Guru and Gauranga at all times and in all circumstances. We remember his example of a full-fledged life in Krishna consciousness with joy and inspiration, and hold his memory in our hearts as we continue on the path.

With special thanks to Sripad Jai Balai Prabhu in Tijuana, and Nitai’s sister Paz Escalante in Guadalajara, for their kind help in preparing this remembrance.

View all posts by vishakhadasi108