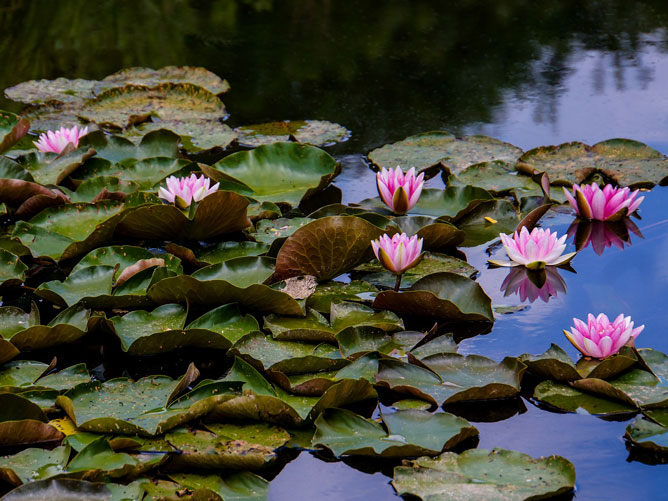 The great clouds of the sādhus always shower this nectar over the garden of the world, and as a result, fruits produced by this nectar ripen. The devotees constantly eat these fruits, and by their love the people of the world live.


Mp3 audio file
śrī-chaitanya-sama āra kṛpālu vadānya
bhakta-vatsala nā dekhi trijagate anya
We do not see anyone throughout the three worlds who is more merciful, magnanimous, and affectionate to devotees than Śrī Chaitanya.

O devotees, listen to these Pastimes with faith! By hearing them, you will attain the feet of Śrī Chaitanya.

By their grace, you will understand the essence of Kṛṣṇa’s nature and you will reach the culmination of the conclusions of all the scriptures.

O devotees, please listen to my humble words. Adorning my body with the dust of your feet, I submit something before you.

(In the reservoir of Śrī Chaitanya’s Pastimes) The principles of devotion to Kṛṣṇa are the forest of blooming lotus flowers and the rasa of divine love is the forest of lilies blooming there night and day. May the bees of your hearts play amongst them, tasting their nectar.

Devotees of various moods sport there as swans and chakravāka birds. For eternity, these devotee-swans find and eat the lotus flowers of Kṛṣṇa’s Pastimes.

May you all go to that reservoir and play there forever as swans and chakravāka birds. All your suffering will end, you will experience the greatest happiness, and easily you will feel the joy of divine love.

The great clouds of the sādhus always shower this nectar over the garden of the world, and as a result, fruits produced by this nectar ripen. The devotees constantly eat these fruits, and by their love the people of the world live.

When the condensed milk of Śrī Chaitanya’s Pastimes and the fine camphor of Śrī Kṛṣṇa’s Pastimes combine, they become very sweet, and those who taste them by the grace of Śrī Guru and the sādhus know the magnitude of their sweetness.

Without the nectar of these Pastimes, even if devotees eat rice, their vitality remains weak, but by drinking just one drop of this nectar, their bodies and minds flourish, and they laugh, sing, and dance.

So drink this nectar, of which there is nothing equal, with firm faith in your heart. Do not fall into the ditch of false argument. If you fall into this foul and harsh whirlpool, you will lose everything.

I hold on my head as an ornament the divine feet of Śrī Chaitanya, Nityānanda, Śrī Advaita, the devotees, and all the devotee-listeners, by whom all desires are fulfilled. 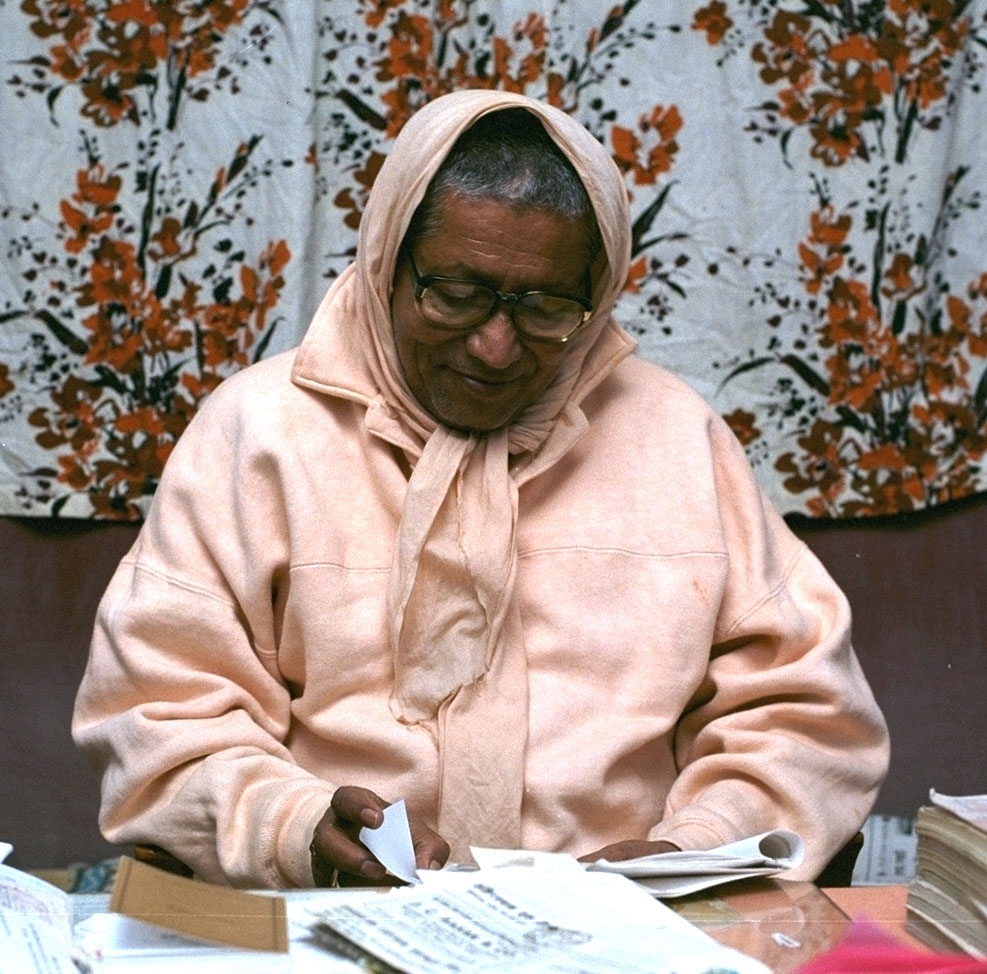 Where is the Lord of My life, who is playing His flute? What shall I do now? Where should I go to find the son of Mahārāj Nanda?

A rare, beautiful recording of Srila Gurudev chanting the verses of chapter two of the Madhya-lila of Sri Chaitanya-charitamrta, describing Sriman Mahaprabhu’s depth of divine love.
Download mp3 audio file.
This recording was made by Sripad Srutasrava Prabhu (who later became Sripad Bhakti Sharan Vaishnav Maharaj) when His Divine Grace spontaneously recited the full chapter one day. Srutasrava only caught the second part, however, and later requested Srila Gurudev to chant the first half. He then spliced the two recordings together–which explains some disjointedness in this audio file. 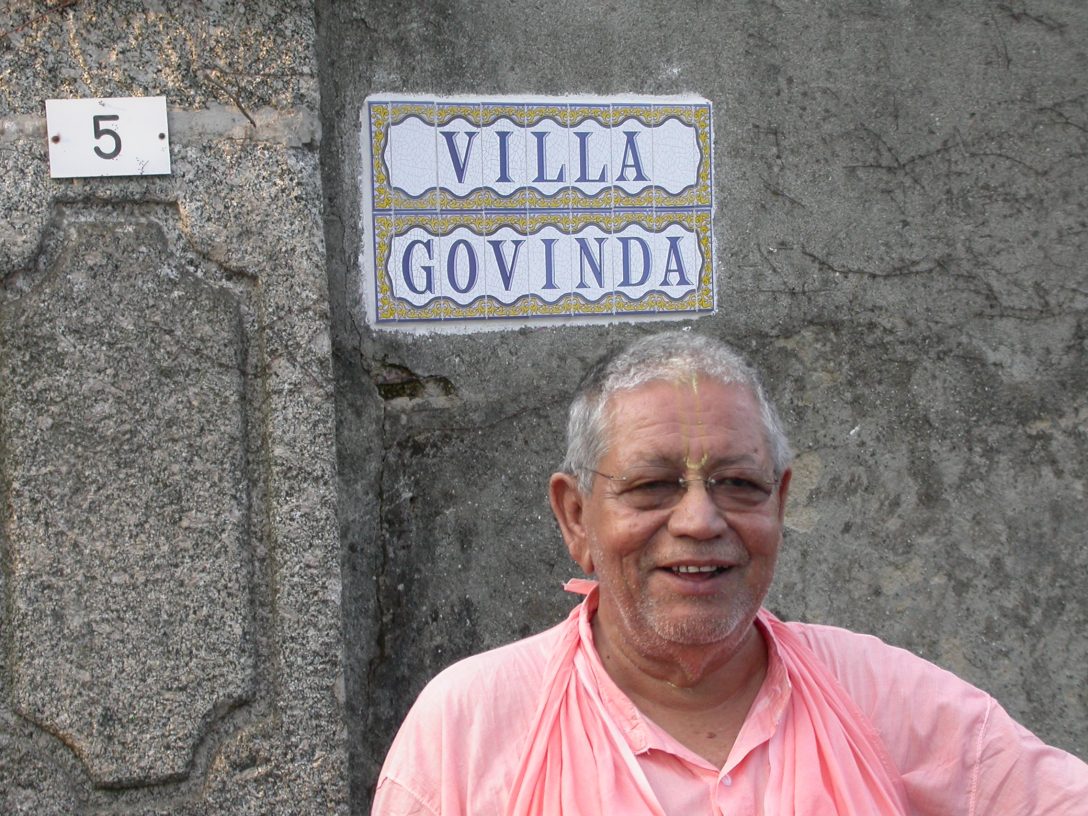 Krishna consciousness is a very easy thing because it is everybody’s religion. It is not the religion of Hindus, it is not the religion of Muslims, or Christians, or Buddhists, or followers of the Shankar sampradāya. They have some sampradāya [group], but we do not really have a sampradāya. Krishna consciousness is the religion of the jīva-soul.
jīvera ‘svarūpa haya—kṛṣṇera ‘nitya-dāsa’
kṛṣṇera ‘taṭasthā-śakti’, ‘bhedābheda-prakāśa’
(Śrī Chaitanya-charitāmṛta: Madhya-līlā, 20.108)
[“The soul is by nature an eternal servant of Krishna. The soul is Krishna’s tatastha-sakti (marginal potency); a manifestation both distinct and non-distinct from Krishna.”]
kṛṣṇa bhuli’ sei jīva anādi-bahirmukha
ataeva māyā tāre deya saṁsāra-duḥkha
(Śrī Chaitanya-charitāmṛta: Madhya-līlā, 20.117)
[“When souls outside the realm of time and space turn away from Krishna and forget Him, Maya subjects them to the various miseries of worldly existence.”]
And how can we get relief from this environment? That has also been given by Kavirāj Goswāmī very clearly and in a very simple way:
brahmāṇḍa bhramite kona bhāgyavān jīva
guru-kṛṣṇa-prasāde pāya bhakti-latā-bīja
(Śrī Chaitanya-charitāmṛta: Madhya-līlā, 19.151)
[“While wandering throughout the world, a fortunate soul obtains the seed of the creeper of devotion (faith) by the mercy of Guru and Krishna.”]
mālī hañā kare sei bīja āropaṇa
śravaṇa-kīrtana-jale karaye sechana
(Śrī Chaitanya-charitāmṛta: Madhya-līlā, 19.152)
[“When a person receives the seed of devotional service, he should take care of it by becoming a gardener and sowing the seed in his heart. If he waters the seed gradually by the process of śravaṇ and kīrtan [hearing and chanting], the seed will begin to sprout.”]
upajiyā bāḍe latā ‘brahmāṇḍa’ bhedi’ yāya
‘virajā’, ‘brahmaloka’ bhedi’ ‘paravyoma’ pāya
tabe yāya tad upari ‘goloka-vṛndavāna’
‘kṛṣṇa-charaṇa’-kalpa-vṛkṣe kare ārohaṇa
(Śrī Chaitanya-charitāmṛta: Madhya-līlā, 19.153–4)
[“As one waters the bhakti-latā-bīja, the seed sprouts, and the creeper gradually grows to the point where it penetrates the walls of this universe and goes beyond the Virajā River, lying between the spiritual world and the material world. It attains brahma-loka, the Brahman effulgence, and penetrating through that stratum, it reaches the spiritual sky and the spiritual planet Goloka Vṛndāvan.
“Being situated in one’s heart and being watered by śravaṇ-kīrtan, the bhakti creeper grows more and more. In this way it attains the shelter of the desire tree of the lotus feet of Kṛṣṇa, who is eternally situated in the planet known as Goloka Vṛndāvan, in the topmost region of the spiritual sky.”]

We must search for Śrī Krishna, and it will easily come to us. And who is Krishna? If we go to the sādhu, they will say and show us Reality the Beautiful.

That is all. It is a very easy thing: it is only necessary to have mercy from Sādhu, Guru, and Vaiṣṇava. Through that we will get some sukṛti, and sukṛti means our fortune-maker. We must search for Śrī Krishna, and it will easily come to us. And who is Krishna? If we go to the sādhu, they will say and show us Reality the Beautiful.
You will see God consciousness all over the world, everywhere, under different names. But who is the Supreme Personality of Godhead? That is found in Krishna consciousness. Krishna is the Supreme Personality of Godhead, and why? That explanation is very simply given in the scriptures. Then we can understand easily that Krishna-bhajan, worship of Krishna, and practising Krishna consciousness is our life’s goal. That has been given by Śrīla Swāmī Mahārāj and Śrīla Guru Mahārāj, and now the day has come when it is continuing [in this world] in a non-stopping way. Maybe somewhere some disturbance comes, and it will come, because that is the nature of this mundane world.  We are always living within a disturbing environment, and so it must be with us, but we shall cross over all  disturbance and proceed to our destiny, and that destiny is, Kṛṣṇa-charaṇa’-kalpa-vṛkṣe kare ārohaṇa, service to Krishna.

Leaving the plane of exploitation, and leaving the plane of renunciation, we must try to establish ourselves in the plane of dedication. And dedication to whom? We shall surrender to whom? That is the Supreme Personality of Godhead, that is Krishna. Śrīmad Bhāgavat said clearly, Kṛṣṇas tu Bhagavān Svayam. In Brahma-saṁhitā it is told,
īśvaraḥ paramaḥ kṛṣṇaḥ sachchidānanda-vigrahaḥ
anādir ādir govindaḥ sarva-kāraṇa-kāraṇam
(Śrī Brahma-saṁhitā: 5.1)
We must worship Krishna, because Krishna is Īśvar [the Lord], and He is Parameśvar [the Supreme Lord], and He is sach-chid-ānanda-vigraha, the eternal form of consciousness and bliss. Anādir ādiḥ: He is the beginning and beginningless. His name is Govinda, and sarva-kāraṇa-kāraṇam, He is the cause of all causes. We can see this very clearly in Brahma-saṁhitā.
With the mood of devotion that is within us and within everybody’s heart we can worship Kṛṣṇa very easily. We have affection, love, and beauty, and through that we can worship Him. Krishna is the ocean of nectar and when we come in touch with Him we will get everything. This is Mahāprabhu’s conception and Śrīla Swāmī Mahārāj and Śrīla Guru Mahārāj, both world Gurus, preached this conception in this world.
Mahāprabhu Chaitanyadev appeared in this world five hundred years ago with His paraphernalia and associates, and through Śrīman Mahāprabhu’s associates the six goswāmīs we have got that Krishna conception, and that is the supreme conception of our lives. Everywhere there is some fearful environment, but in Krishna consciousness the  environment always gives us ecstasy, hope, and happiness. That is the wealth of Krishna consciousness.
kṛṣṇa-bhakti-rasa-bhāvitā-matiḥ
krīyatām yadi kuto ‘pi labhyate
tatra laulyam api mūlyam ekalaṁ
janma-koṭi-sukṛtair na labhyate
(Śrī Chaitanya-charitāmṛta: Madhya-līlā, 8.70)
[“Pure devotional service in Krishna consciousness cannot be had even by pious activity in hundreds and thousands of lives. It can be attained only by paying one price — that is, intense greed to obtain it. If it is available somewhere, one must purchase it without delay.”]

The Vedic knowledge differentiates in many ways, but in Krishna consciousness everybody has the same position

Everywhere there are some rules, regulations, and restrictions, many things which discourage us. In the Vedic knowledge also we can see many things to discourage us: ladies cannot worship the deity, and there are many different types of positions for gents: brāhmaṇ [priestly class], kṣatriya [warrior class], vaiśya [agricultural/trading class], śūdra [worker class], and also brahmachārī [celibate students], vānaprastha [persons retired from worldly work], sannyasī [renunciants], gṛhastha [a person who engages in the duties of family and worldly work]. The Vedic knowledge differentiates in many ways, but in Krishna consciousness everybody has the same position: if they have attraction and hankering for Krishna consciousness then they can enter into that world. There is love, beauty, ecstasy, charm, and laulyam, hankering, is the only wealth. You can buy that only through your hankering.
This is Mahāprabhu’s conception, and we have got that through our Guru Mahārāj and Śrīla Swāmī Mahārāj, and now all over the world people are chanting the Hare Krishna mahāmantra. The Hare Krishna mahāmantra is nondifferent with Krishna, and if we can chant the Hare Krishna mahāmantra, we will get everything that we need and that we want in our lives. We will get everything.
Spoken by Srila Gurudev on 16 July 1992, in Miami, USA