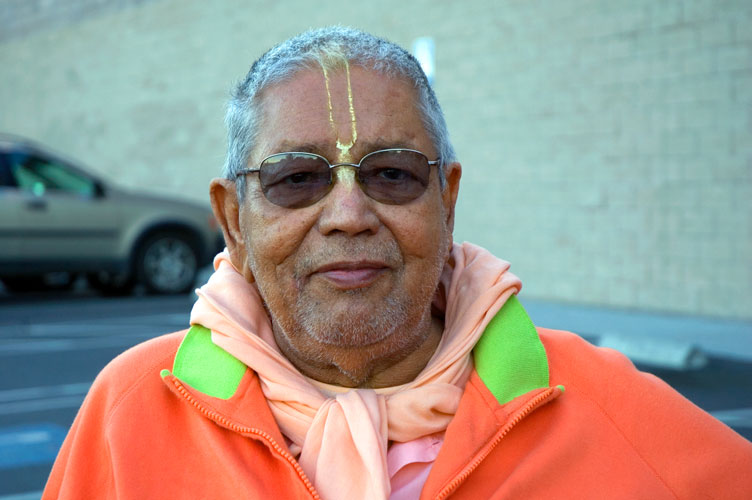 It is necessary to jump in any way with our full energy and hankering for a connection with the transcendental wave.

Once Guru Mahārāj questioned someone, “Is Īśvar existing or not, is God existing or not?” And that person, a sādhu, maybe a paramahaṁsa sādhu, responded, “You are not seeing God? He is existing everywhere.” We heard this question’s answer from Guru Mahārāj. The transcendental wave is always flowing in this material world. We have a transcendental body, but it is covered by illusion. Moving or non-moving, there is life everywhere. It is proved by the scientists now. We have also heard from some sculptors that they give two kinds of certificate to stone: one certificate is dead stone, one is living stone. When we were making a building in Nabadwīp, we purchased stone for some stonework, and I saw that there were different rates. I asked the man that I purchased from, “You are saying four thousand per lorry, and he is saying three thousand six hundred per lorry.” “Oh, that is dead stone, dead stone!” I know about dead stone and living stone, but how did he know? That was my surprise.
Now science is proceeding to the philosophical world. I heard from Guru Mahārāj that the wife of Einstein asked him, “What are you now trying to discover?” and Einstein answered, “After five hundred years, you and I will be able to talk, just like we are speaking now. I want to make that kind of discovery.” Guru Mahārāj told this.
Then science is proceeding so far, but without the mood of submission it cannot touch the transcendental wave in any way. It is not possible. But it is very good news that so many scientists have joined with our Mission, and every year they are making seminars in different places about this knowledge. ‘Science and Religion’: when Pusta Kṛṣṇa came here last time he joined that meeting in Salt Lake City, Kolkata. So many scientists are with us, and they are researching still about Kṛṣṇa consciousness. This is the situation.
It is necessary to jump in any way with our full energy and hankering for a connection with the transcendental wave. And it is a very appropriate time, because it is Kali Yuga. We know that there are so many disturbances and so many obstacles in this age. Only  Harinām-saṅkīrtan can give us a good result  by connecting us with the transcendental divine form of the Lord.
Śabda (sound), sparśāḥ (touch), rūpa (sight), rasa (taste), gandha (smell)—all the qualities in the material world are existing in a refined and positive way in the transcendental world. The transcendental sound vibration form of the Lord is called Harinām. It is very easy to believe, because now ether is connecting the whole world, and beyond this universe also. Now we are doing email, we are doing telephone, we are doing television. We are visiting many things through television. The carrier, the bearer, is ether. If it is possible in this material world, and we are actually a part of the transcendental world, then our spiritual connection must also be activated.
uttiṣṭhata jāgrata prapyo varān nibodhata
(Kaṭha Upaniṣad: 1.3.14)
“Awake, arise, and get your property. You are the sons of nectar, of the nectarean ocean. Then why are you sleeping and dreaming that a tiger has attacked you, and crying?”
It is actually a kind of dream. A tiger has not attacked us, but we are dreaming that a tiger has attacked us and crying very loudly in bed. But our friend who is near will not take a stick or a gun, he will go and touch me, and will tell, “Oh, wake up, wake up!”
śṛṇvantu viṣve amṛtasya putrā
(Śvetāṣvatara Upaniṣad: 2.5)
“Awake and arise, oh sons of nectar.” This is the call of the Upaniṣads. “You are the sons of nectar.” This is written on the cover of the book The Search for Sri Krishna. This is the clarion call.
uttiṣṭhata jāgrata prapyo varān nibodhata
kṣurasya dhārā niśitā duratyaya
[durgaṁ pathas tat kavayo vadanti]
(Kaṭha-upaniṣad: 1.3.14)
[“Arise! Awake! Try to understand the boon that you now have in this human form of life. The path of spiritual realization is very difficult; it is sharp like a razor’s edge. That is the opinion of learned transcendental scholars.”]
Srila Gurudev speaking in Italy during his visit in September 2000