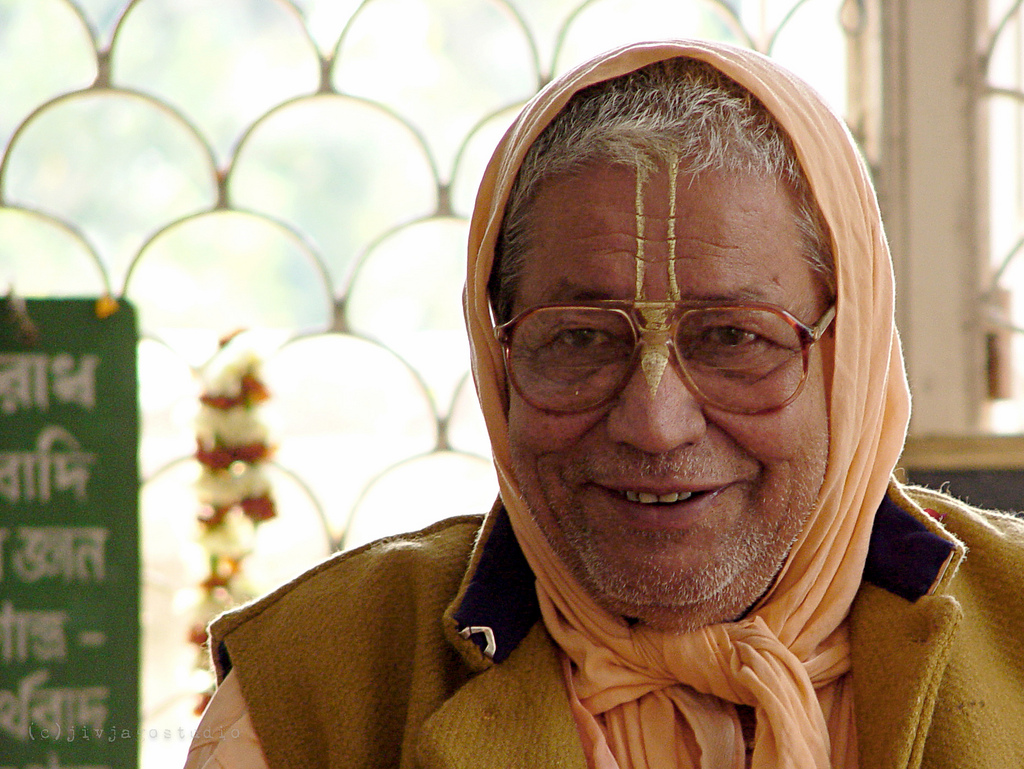 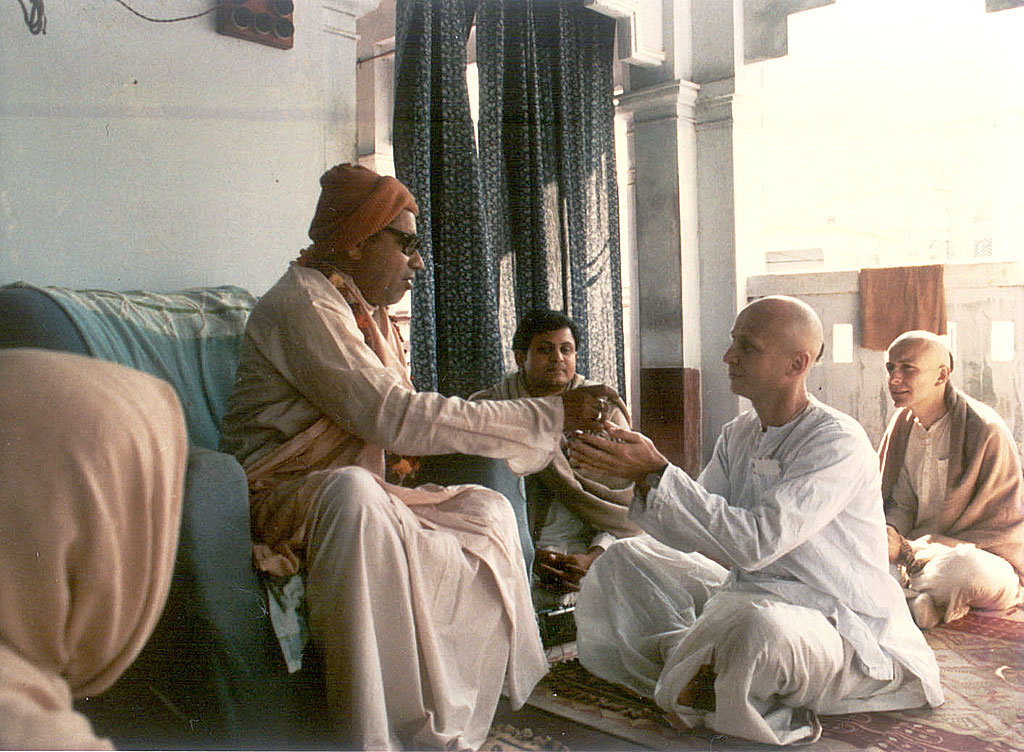 Every moment will be joyful in your life. Dedication to the Lord and chanting the Holy Name, the nondifferent form of the Lord, can give us all auspiciousness.

Question: I would really like to hear about Sri Chaitanya Mahaprabhu, and how we can serve him.
Srila Gurudev: Mahaprabhu first indicated to beginners that you will get all the benefit of your spiritual life if you can chant the mahamantra properly. Your mind is like a mirror covered with dust, and through chanting that dust will be removed and you will see your true form. The suffering that we experience from so many things in this material world will also reduce and finally go out.
cheto-darpaṇa-mārjanaṁ bhava-mahā-dāvāgni-nirvāpaṇaṁ
śreyaḥ-kairava-chandrikā-vitaraṇaṁ
Through your chanting feelings of God will reveal in your heart, you will see your beautiful divine form, and your mood of service will give such happy light in your spiritual environment. You will get very close association with your Lord, like the feelings between a husband and wife.
cheto-darpaṇa-mārjanaṁ bhava-mahā-dāvāgni-nirvāpaṇaṁ
śreyaḥ-kairava-chandrikā-vitaraṇaṁ vidyā-vadhū-jīvanam
ānandāmbudhi-vardhanaṁ
When that divine form of the Lord as Harinam reveals within your heart then automatically joy will come, and every moment when you are chanting the Holy Name, the feeling of God’s association will come to you.
prati-padaṁ pūrṇāmṛtāsvādanaṁ
Every moment will be joyful in your life. Dedication to the Lord and chanting the Holy Name, the nondifferent form of the Lord, can give us all auspiciousness.
Sri Chaitanya Mahaprabhu advised the conditioned souls in this way.
prabhu kahe—kahilāṅ ei mahāmantra
Of all mantras this is the best mantram in this age of Kali-yuga. Other practising processes will not be so fruitful. Meditation, chanting, and congregational chanting of this mantram, and service to this mantram, will give all good results to us.
Then if we want to satisfy Sri Chaitanya Mahaprabhu we will first try to chant the Hare Krishna mahamantra, and if we can do that continuously that is very good.

Be humble, be tolerant and give honour to others

Mahaprabhu gave eight verses as advice for the conditioned souls, and in the third verse He explained how attachment, love, and affection will grow for chanting the Holy Name. He gave this advice: if you can be humble, be tolerant, and give honour to others then you will be worry-free from your circumstances.
You can believe and you can live within the faithful plane. Faith is necessary. That is the first basis of this conception. Not only in the line of Krishna consciousness, but the first advice of all religious conceptions is, “Be faithful”. At first, beginners may not be able to maintain their faith because they are not seeing anything and not getting anything in their hand. They do not have practical knowledge and experience. For that reason strong faith will not come immediately. But through realisation, through association, through hearing, through reading, faith will become more and more strong. In different ways our faith will grow more and more, but the scriptures say that association is the best. If good association is not available then we can practise through reading the books, chanting the Holy Name, hearing from an expert, and so on.
We must try to realise our previous activity, our present spiritual situation, and our future prospect. It is necessary to take advantage of the value of the present time.
Sri Chaitanya Mahaprabhu will be happy if we follow His directive to chant the mahamantra without offence. The mahamantra Himself is Radha and Krishna. Both Their Names are present within this mantra with a calling mood. Even within some processes in this material world we can see that sound can take form: now when you are talking to someone by telephone it is also possible to see their form, their mood, and so on. So, if we can chant properly They will reveal in our heart. We cannot say that it will happen immediately but anyone can get it, and if someone is sincere with their practice they will get some feelings from the beginning.

When Mahaprabhu said that there is no alternative other than chanting the Holy Name of the Lord, then it is not necessary to go left or right or anywhere else. Be steady, be faithful, and try, and success must come to you.

We are trying but not properly trying, because we are always mixing with material things, and it is natural. If we can chant without offence then proper purification will come and we must be benefitted through that. Time is a factor: it is in front of me and must give me some disturbance. But if we can see the eternal time that is nothing by comparison.
When Mahaprabhu said that there is no alternative other than chanting the Holy Name of the Lord, then it is not necessary to go left or right or anywhere else. Be steady, be faithful, and try, and success must come to you. And because “Hare Krishna” is Radha–Krishna then if They reveal in your heart you will automatically join with the Pastimes of Krishna-lila. That is the gift of Sri Chaitanya Mahaprabhu: Krishna-prema, love for Krishna, affection for Krishna, and service for Krishna. When it will reveal in your heart then Krishna will also reveal with that mood.
In this way, many things in many places have given us the clue of practising life. But at first beginners must try with faith.
Srila Gurudev speaking in Italy, September 2000, during his Sixteenth World Tour. 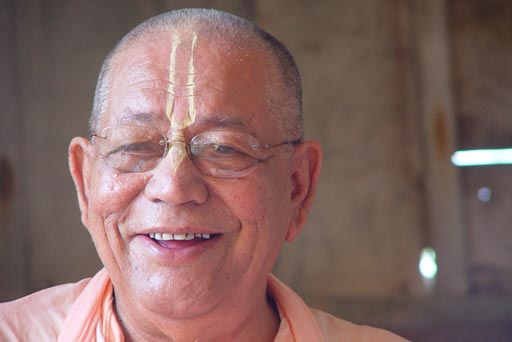 Mahaprabhu said, “Why will you chant the mahamantra? We will chant because,
cheto-darpaṇa-mārjanaṁ bhava-mahā-dāvāgni-nirvāpaṇaṁ
We want to remove the dust of our mind and we want to see our own divine form, our transcendental form.

Bhava-mahā-dāvāgni-nirvāpaṇam: all inauspiciousness and difficulties will go. And, śreyaḥ-kairava-chandrikā: before the sun appears light comes in this world, and like that, before the Lord appears some light of the transcendent will come to us and we will feel what is day and what is night.
Mahaprabhu expressed this, and then vidyā-vadhū-jīvanam: finally Mahaprabhu said you will get service to the Lord in the transcendental world. Without feeling anything you will suddenly see, “I am there.” It is like our death: when death happens that man cannot understand, “I am going to die.” He may feel it is his deathbed but when he leaves the body he cannot feel it. He will see, “Oh ho, this is my body here and I am here.” Sometimes they try to go back inside the body but they cannot enter again. Our transcendental service connection will appear like that. Then we will be happy, and when we see our situation completely change we will see the ray of joy, the ray of sachidananda. Ananda, joy, ecstasy. We will try to go back quickly there and we will not wait.
Srila Gurudev, speaking in Byron Bay, Australia, 24 April 1999 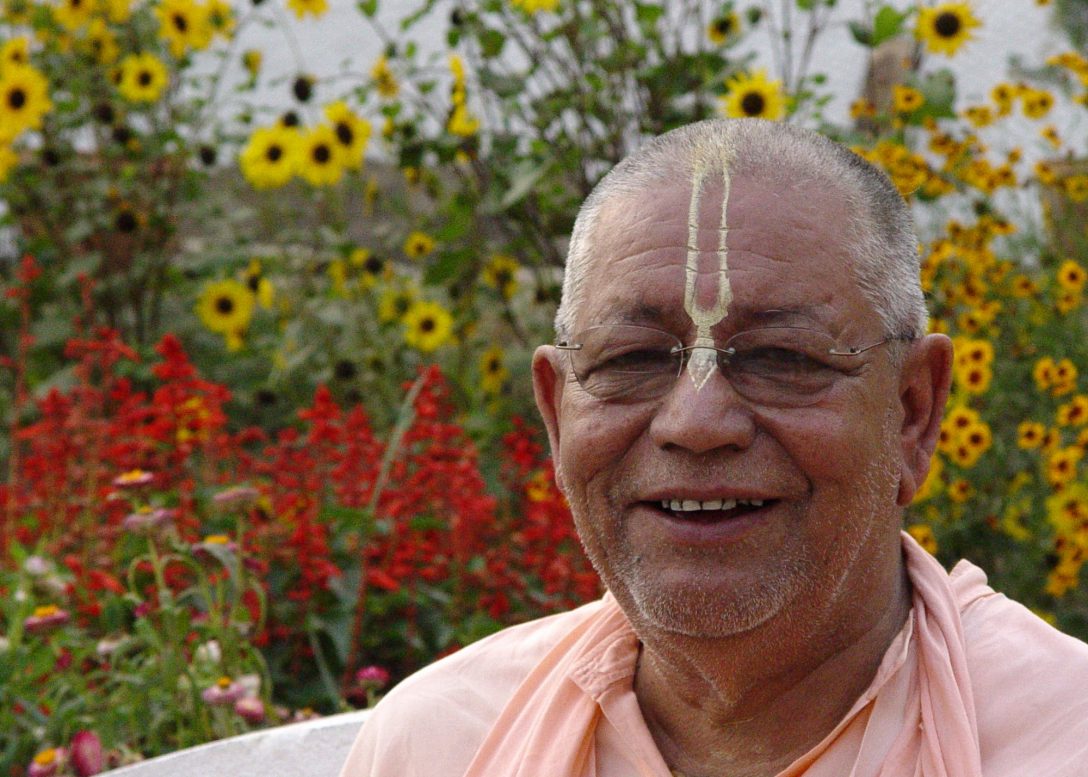 We are only chanting the mahamantra with a  calling mood.
hare kṛṣṇa hare kṛṣṇa kṛṣṇa kṛṣṇa hare hare
hare rāma hare rāma rāma rāma hare hare
This is called the mahamantra. It is not only the Tarak-brahma-nama [mantra for deliverance from the mundane], but of all mantram it is the best—that is the mahamantram. The Lord Himself is living within this mantram, and we will feel His presence when we chant this mahamantra without offence. There are ten kinds of offences we must avoid, and then it will reveal in our heart. This tongue, this mind, everything is material and it will not appear on a material tongue. Where He will appear will be transcendental, and so first through chanting  I want to make myself  a transcendental receiver. 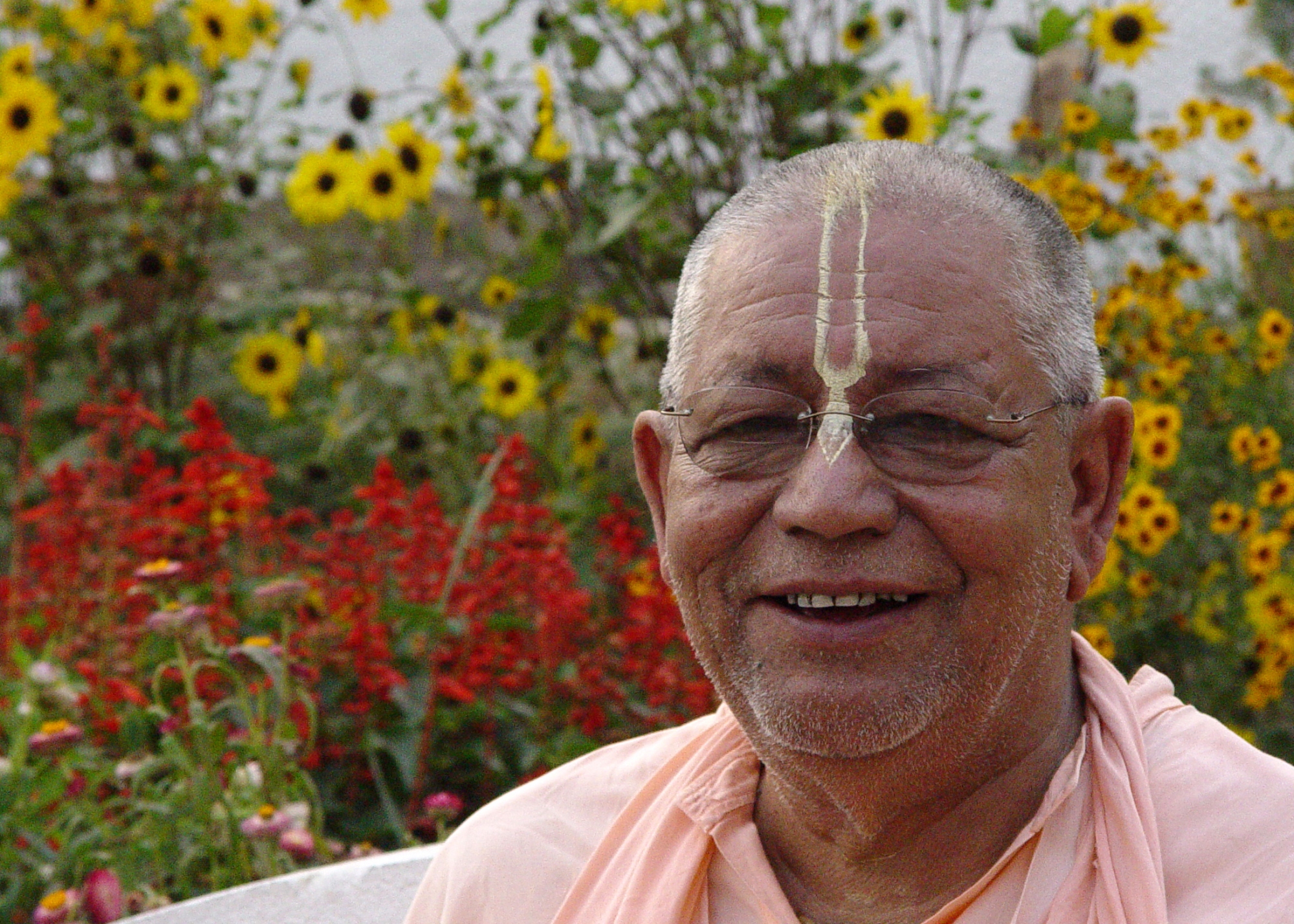 You see with the radio, television, etc. there is a receiver, and then the picture comes, sound comes, everything comes. Only some electronic things are inside there, but when they are set right then they can receive everything. I want to make myself as a good receiver. You have seen the power of ether. Here, within five minutes you can get an answer from India. If you push some button and make some question, then the signal will go there and within five minutes it will come back to you. And what is the bearer? The bearer is ether. We cannot see ether and we cannot feel it also, but we see that some action comes through ether, and it has been discovered by the scientists.
Ether is the super-bearer in this material world, and Harinam mahamantra, the nondifferent form of the Lord, is the spiritual bearer and will make me transcendental when He appears fully with me. He will make me transcendental and He Himself will dance in His nondifferent form. He will reveal in the heart and all inauspiciousness will go out.
Srila Gurudev speaking in Byron Bay, Australia, 24 April 1999 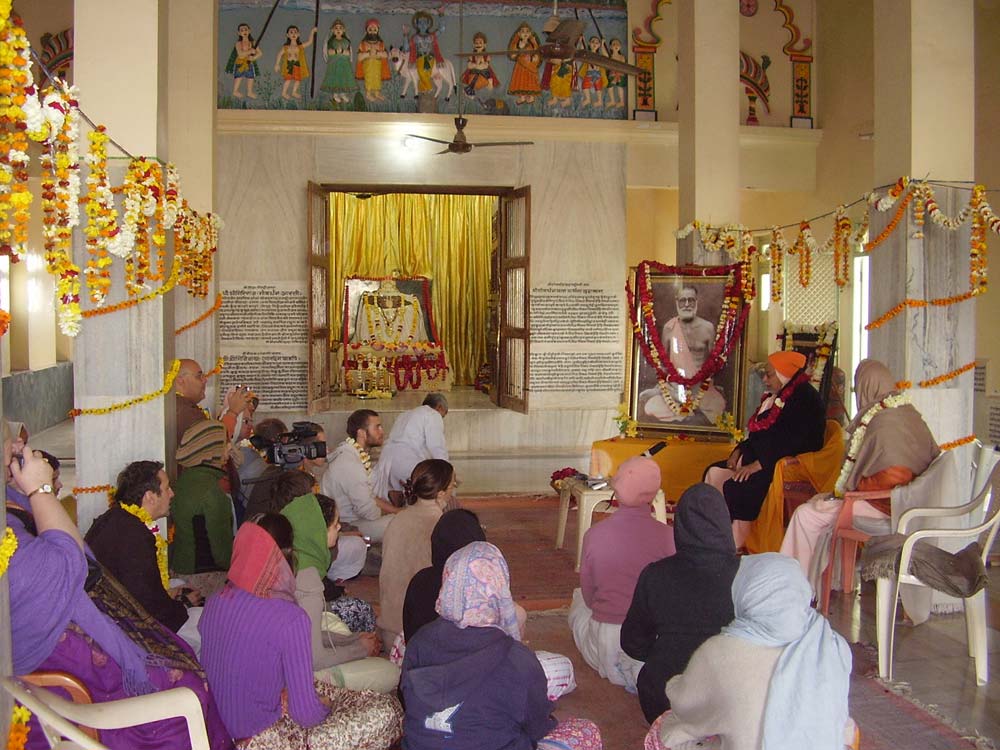 You are all in the group of Saraswati Thakur’s divine servitors. All over the world, not only our Mission. So many Missions have manifested in this world and all are the divine group of Saraswati Thakur’s servants. Finally all over the world everyone has received the Hare Krishna mahamantra, which was the preaching objective of Saraswati Thakur. Now that transcendental, subjective evolution has spread all over the world. I was recently questioned by someone, “You are seeing the world situation, what do you think it will be like?” I told and I believe the world will get more Krishna consciousness and day by day it will spread; the preaching will not stop. Krishna consciousness will never be stopped and it will grow day by day.
That objective was begun by Saraswati Thakur and his group. He wanted to preach Krishna consciousness out of India and all over the world. He sent, in his lifetime, two or three persons to London for preaching and so much money was spent for that. They were not so successful, no doubt, but Saraswati Thakur wanted that. Whoever would come to see him, seeing their capacity he would say, “You are an English-speaking man, you have that Krishna consciousness, and you can preach it.” Prabhupad A.C. Bhaktivedanta Swami took that in his heart and after Prabhupad Saraswati Thakur, he did not forget it. He was always trying to preach and finally, he was successful. Now we are all taking his remnants and going country to country. Guru Maharaj liked him very much and Guru Maharaj gave so much enthusiasm to Prabhupad A.C. Bhaktivedanta Swami. Others were envious of him but Guru Maharaj was not and always giving the conception of subjective evolution to him and Prabhupad A.C. Bhaktivedanta Swami knew that. He was a very simple-hearted Vaisnava and he declared, “I am learning from Sridhar Maharaj.” This kind of declaration is not done by an ordinary man. One who has real substance in his heart, he can declare like that. “If you want to learn anything, go to Sridhar Maharaj and learn from him. He is my siksa-guru.”
I know him very well because at that time I was a child and lived with him. When all over the world they are chanting that Holy Name of the Lord and I am seeing that, then I understand it is coming down from above, it is not a material thing. If it was a material thing, after a few days it would be finished, but I am seeing that day by day this Krishna consciousness is spreading, and it will grow more. It is all the mercy of Srila Bhakti Siddhanta Saraswati Thakur. He started in Mayapur Vraja Patan and there was not one servant, only one maidservant cleaning, etc., but later, one by one they joined him. Now thousands of servants are trying to preach Krishna consciousness by the grace of Saraswati Thakur. We cannot glorify him properly, but we have tried to the best of our ability
Spoken by Srila Gurudev on the appearance day of Srila Saraswati Thakur, 1 March 2005, at the Soquel Seva Ashram, California, USA.