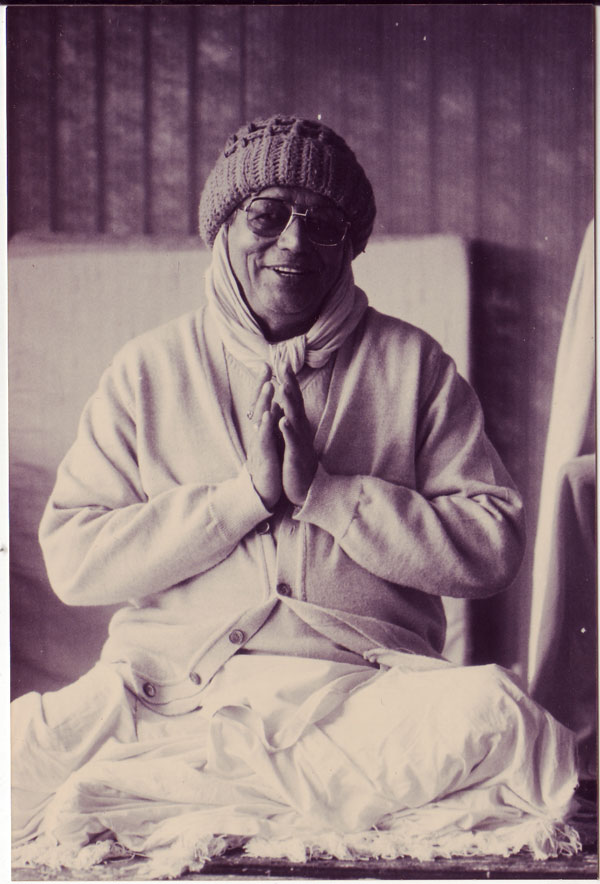 This beautiful collection was produced by our Australian community from recordings of Srila Gurudev made during one of His Divine Grace’s visits to Australia during the 1990s.
Sri Guru Arati Stuti 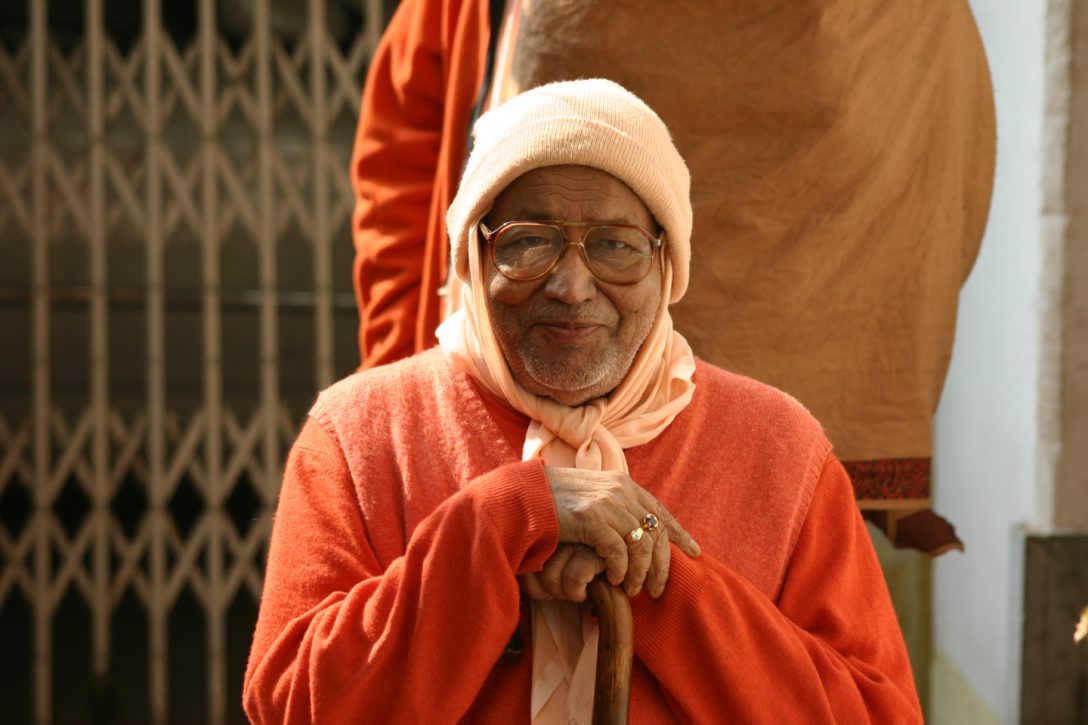 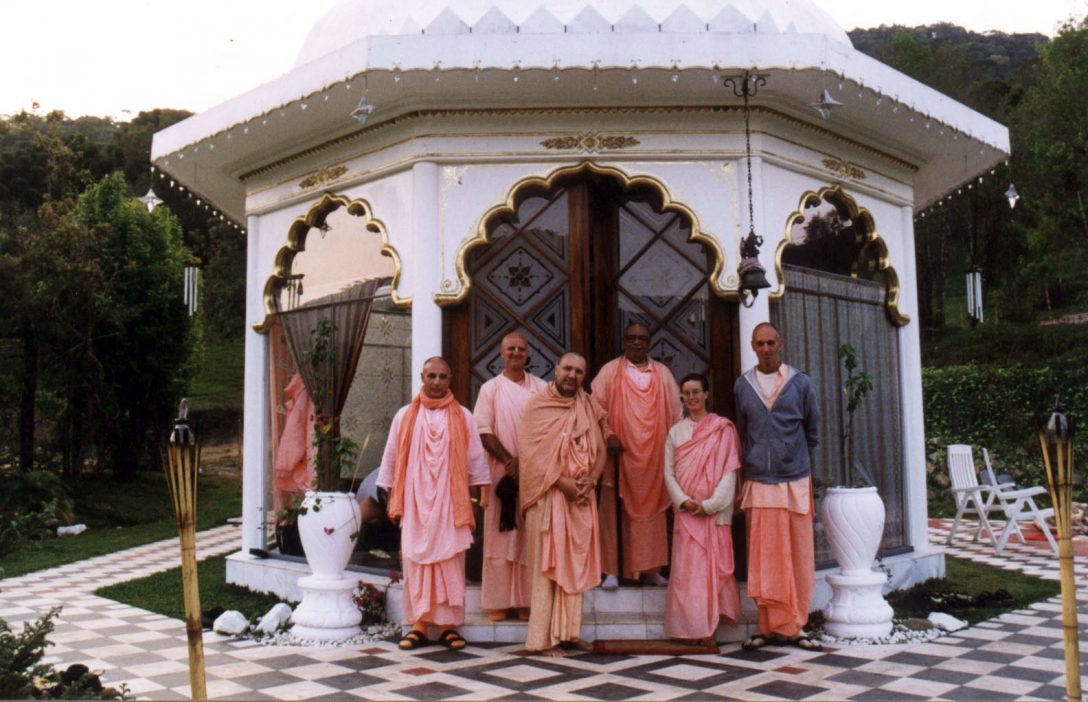 In this exclusive interview with Swami Bhakti Pavan Janardan Maharaj His Holiness shares his rich experience in over twenty years of association with our Gurudev, Srila Bhakti Sundar Govinda Dev-Goswami Maharaj. 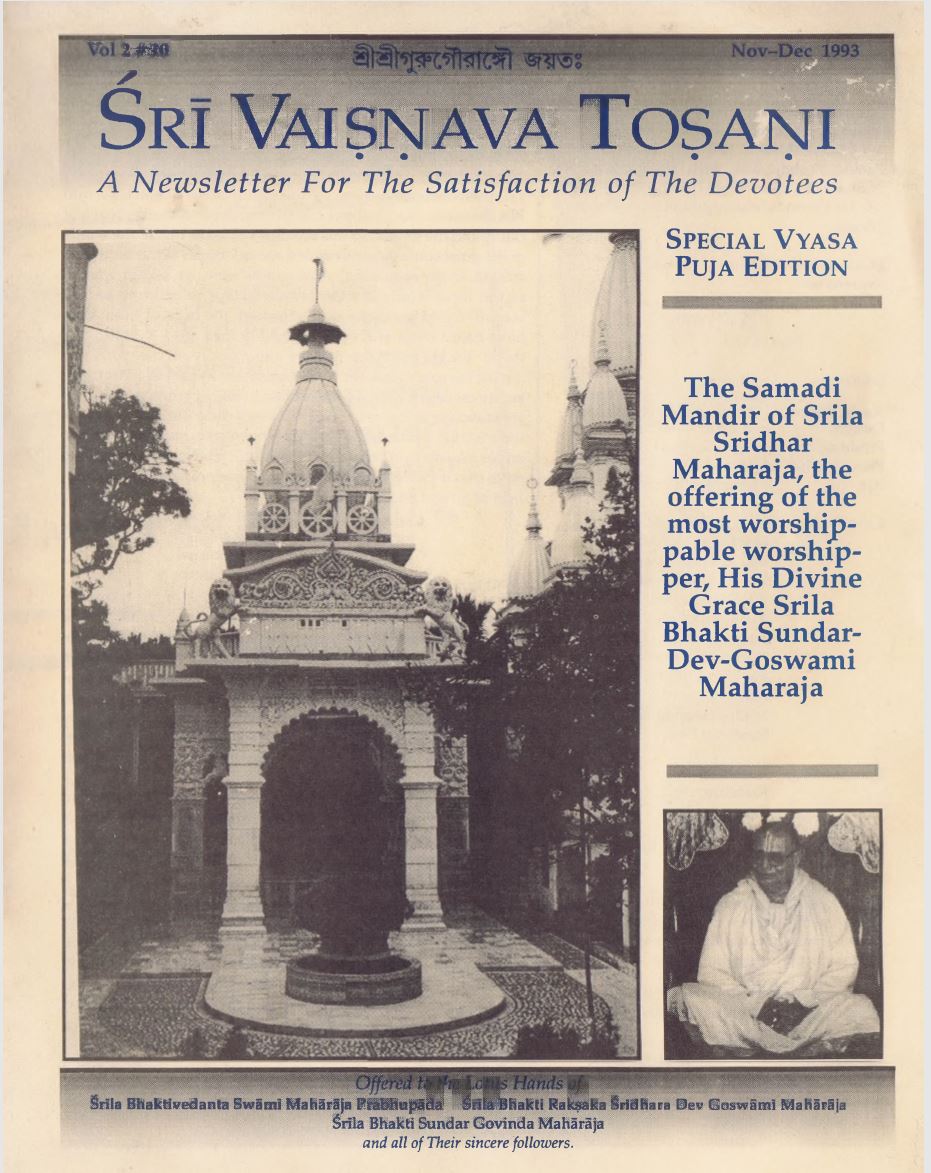 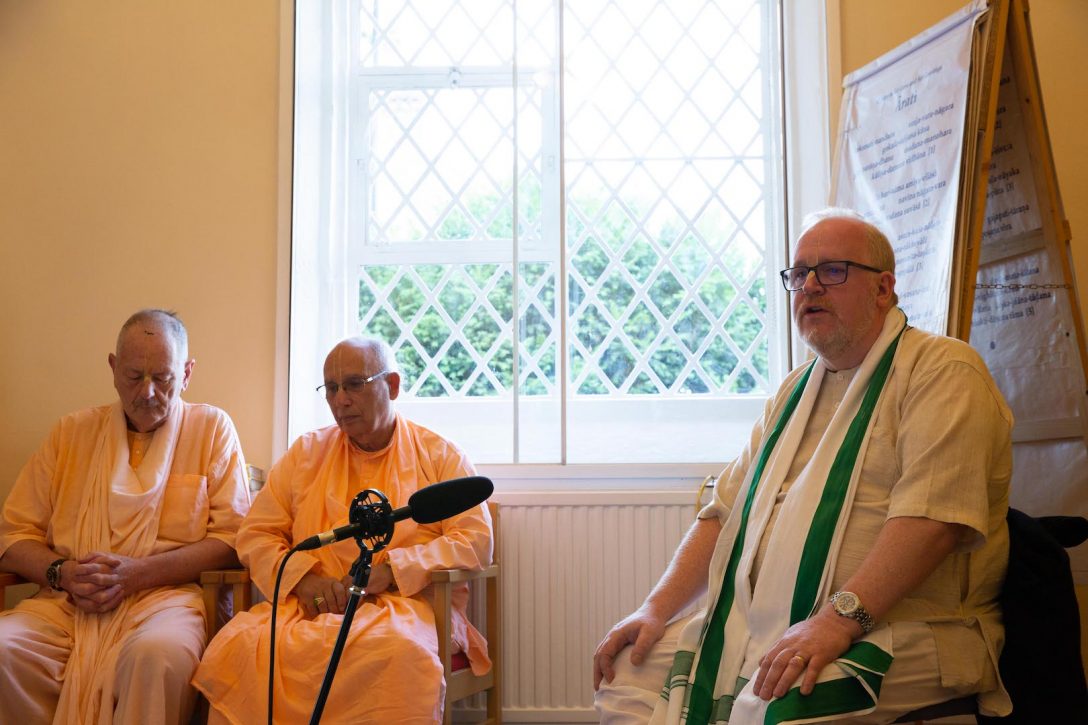 In one sense he was really a man of the world: he knew the world, he knew everything, and he was able to relate to the world in every possible way. But at the same time he was completely from another world and he was able to convey that to us in the simplest way, and as he would say, ‘heart to heart’, in a ‘heart to heart’ way. It wasn’t so much about the theory, although he knew that better than anybody, but just in his dealings with everybody we saw spiritual life in reality. I think that this is his unique contribution.

Sriman Devashis Prabhu speaks with profundity on his appreciation for Srila Gurudev. 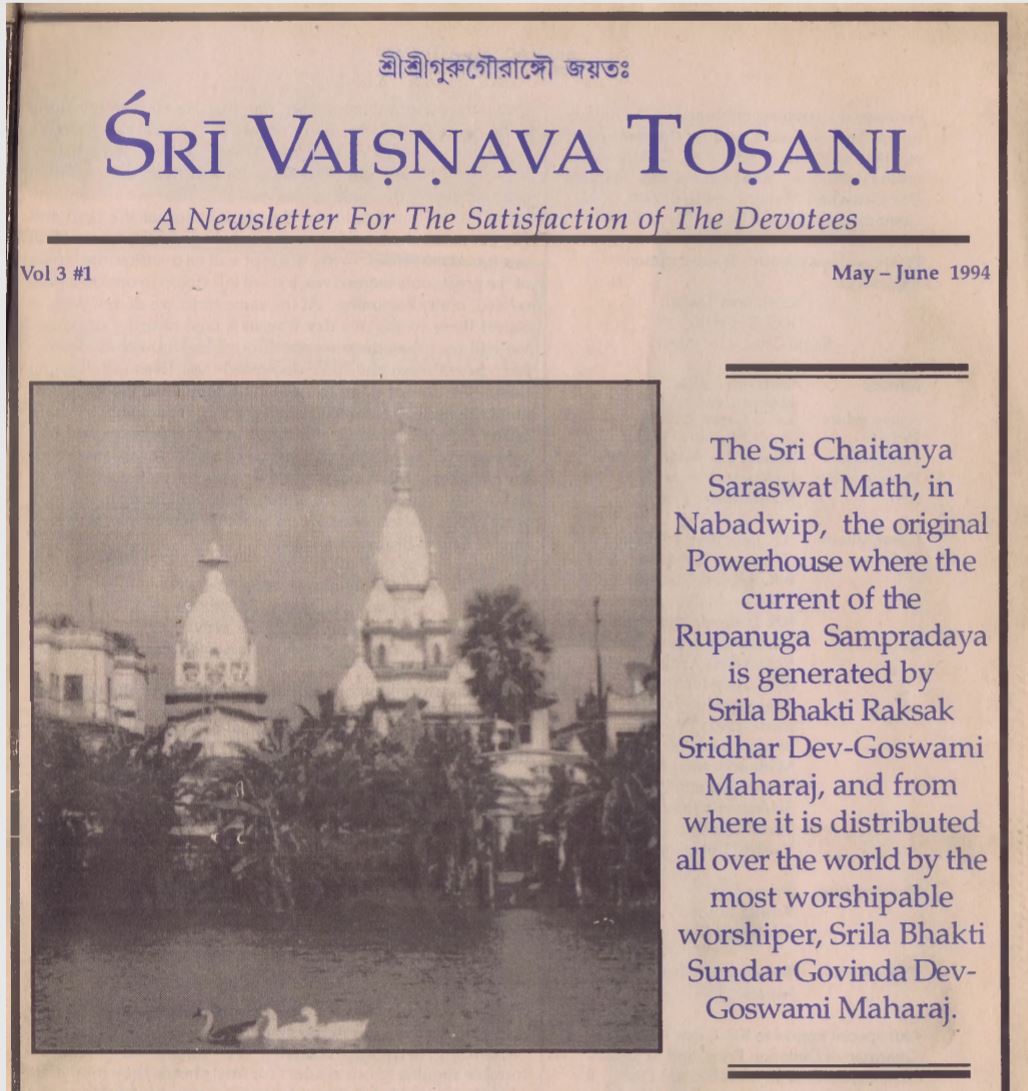 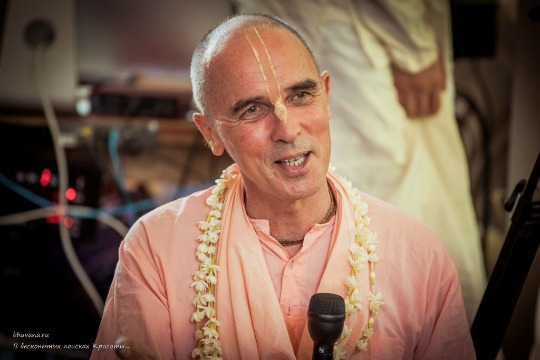 An exclusive, informal, and in-depth interview with Swami Bhakti Ranjan Madhusudan about his appreciation for Srila Gurudev. 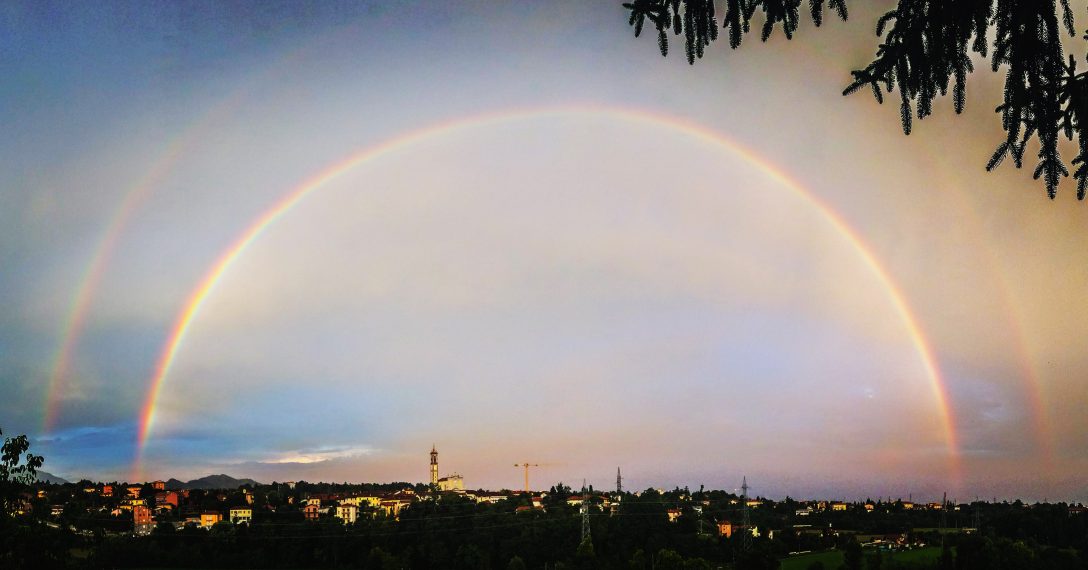 It is our good fortune that we were able to participate in the festivals which concluded last week at our Villa Govinda Ashram on the outskirts of Milan, Italy. The focus of the festival was the inauguration of our Gurudev’s, His Divine Grace Srila Bhakti Sundar Govinda Dev-Goswami Maharaj’s, pushpa samadhi, which took place on Sunday 12 August, the day after Srila Param Guru Maharaj’s, His Divine Grace Srila Bhakti Raksak Sridhar Dev-Goswami Maharaj’s, disappearance anniversary. Sripad Tyagi Maharaj acted as the priest and performed a fire sacrifice at the start of the ceremony; afterwards Sripad Madhusudan Maharaj spoke for some time in glorification of Srila Gurudev. Finally, with a flower which had been preserved from one of Srila Gurudev’s personal garlands on the day of his departure, Krishna Kanta Didi inaugurated the new pushpa samadhi for His Divine Grace. Munindra Mohan Prabhu then concluded by performing an arati to His Divine Grace, accompanied by the singing of Sri Guru Arati and heartfelt offerings of flowers from the devotees and sincere seekers present who had travelled from Italy, USA, England, Brazil, Venezuela, Portugal, Holland, Hungary, Ireland, Latvia, and Ukraine to be a part of this momentous occasion.
We are blessed to have been associated with the Villa Govinda Ashram since its beginnings in 2003, and were present when our beloved Srila Gurudev visited both in 2003 and then again in 2007. On those occasions Srila Gurudev appeared very happy, relaxed, and at home, and many felt that his mercy was flowing very freely there. Srila Gurudev was particularly pleased with the service of the Italian devotees headed by Krishna Kanta DD and Munindra Mohan Prabhu, and was greatly moved by the sacrifice of Krishna Kanta, who manifest the ashram while facing a life-threatening illness. It was there at Villa Govinda that Srila Gurudev revealed his inner heart and pain of separation and openly shed tears on the disappearance day of Srila Param Guru Maharaj in July of 2003. He had also been very specific, when the tour was in the planning stages, about wanting to observe that day with the devotees in Italy.
At Villa Govinda Srila Gurudev had no pressure to give formal lectures or instruction, and rather when he spoke it was when he wanted to, as if with his close friends, and there would be long periods when he would sit in a comfortable silence with the devotees at different places around the ashram. He liked to observe the beautiful panoramic view surrounding the ashram, perched on the corner of a hilltop.
The presiding Deity at the ashram is Sri Giriraj, of whom Srila Gurudev commented, “Bala Gopaljiu is playing inside there”. He is worshipped with natural faith and affection, without much formality, mantras, and so on, as per Srila Gurudev’s direction.
Srila Gurudev would sometimes speak of “the bright future” that is awaiting all the sincere practitioners of this line. One day during his visit to Villa Govinda in 2007, speaking with the devotees about the charm of Sri Krishna’s aprakrita-lila, Srila Gurudev commented, “We give honour to everyone, we must give our full daṇḍavat to everyone, but after that we will go to our playground and with Kṛṣṇa play in śānta-rasa, dāsya-rasa, sakhya- rasa, vātsalya-rasa, and madhura-rasa; parenthood, and servitorhood, friendship, and even paramour love is possible with God. Who can believe it?”
Srila Gurudev himself embodied the aprakrita mood of sweetness, charm, and simplicity.

They are not conscious of their own exalted position. A king, when he is not very conscious of his power, thinks of himself as an ordinary person. It is something like that. Someone may be a great doctor but through affection he may do the work of a nurse for his patient. Out of his love and affection for the patient, he may come down to do such work, but still he is great. This is the beautiful nature of Vṛndāvan life. It is great without the attitude, the air of bigness. Although they are really great, they appear to be simple. Power dressed in affection and love, couched in humility—that is Vṛndāvan. And that is also Nabadwīp.
(Srila Sridhar Maharaj, The Golden Volcano of Divine Love)

As the perfect ambassador of that Goloka plane, Srila Gurudev revealed its sweetness and charming glory, and awakened some attraction within our densely covered hearts for Reality the Beautiful.
At present we cannot begin to properly conceive of what kind of “bright future” is awaiting us, but we are confident that if we can remain, or become, faithful followers of our Srila Gurudev, we must attain it.

We are so fortunate that we have one little thread or rope with His Divine Grace [Srila Sridhar Maharaj]. If we can hold on tightly to that we will have no problem with our spiritual life. That is our good fortune.

Tṛṇād api su-nīchena taror iva sahiṣṇunā—humility is the best quality of Vaishnavism—tṛṇād api su-nīchena. And taror iva sahiṣṇunā—tolerance. Tolerance in this material world gives so much benefit. We will be tolerant remembering Sriman Mahaprabhu’s directives. And if we give honour to others then everyone will be my friend. No one will be my enemy. That is the best procedure.

Anyhow, we will at once be qualified if sincerity and chastity is with us, and love and affection will give us the super benefit of our spiritual life.
(Srila Gurudev speaking on Govardhan Puja in Soquel, California, USA, 10 November 2007)

All glories to our Srila Gurudev, Srila Bhakti Sundar Govinda Dev-Goswami Maharaj, and all glories to his faithful followers, whom we humbly aspire to serve. 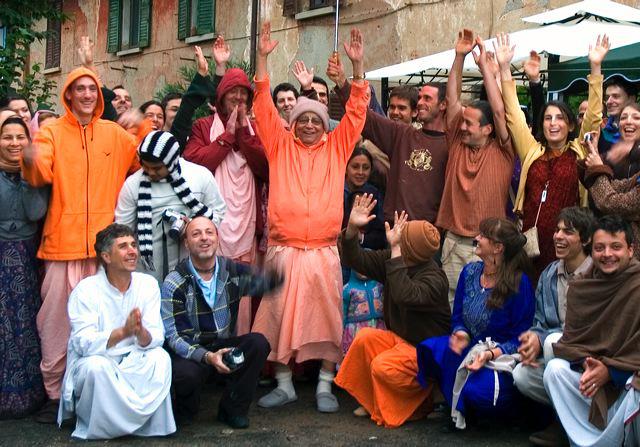 A few photos from the pushpa samadhi inauguration, Sunday 12 August 2018:

Video of part of Sripad Madhusudan Maharaj’s talk, and the following ceremony, arati, and pushpanjali:
https://www.facebook.com/villagovinda/videos/10155812813391909/ 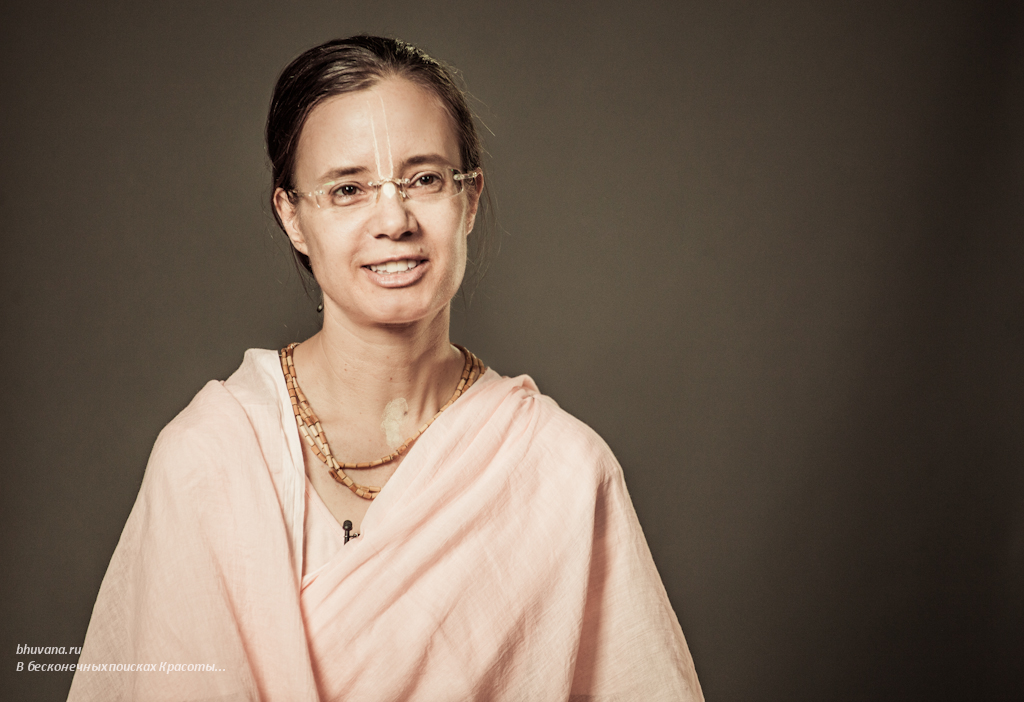 Continuing our series Remembering Srila Gurudev, Bhakti Lalita Devi Dasi shares her memories and experiences with His Divine Grace in this exclusive interview. 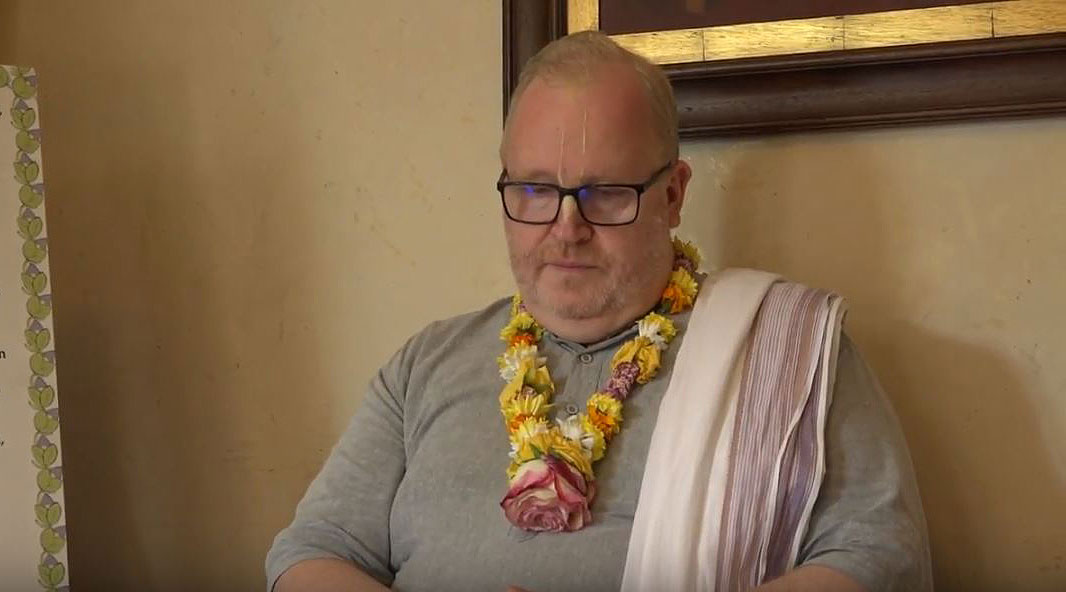